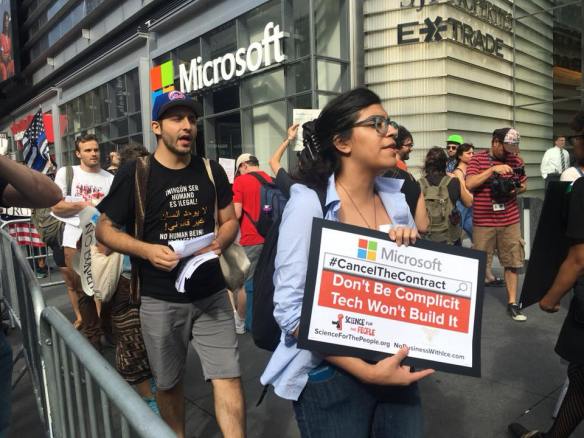 Abstract: #TechWontBuildIt is a burgeoning social movement comprised of skilled workers in the tech industry who are pushing back against ethically questionable decisions made by their employers. As technological innovation has advanced, companies are building increasingly complex and powerful software with unprecedented capabilities, and the pool of interested parties seeking access to such software has greatly increased. Most recently, we have seen lucrative contracts being offered by various branches of the United States government, particularly the Department of Homeland Security and the Department of Defense, to tech companies for the creation of customized technology. The computational power and increased storage capacity of these new systems would give United States law enforcement agencies invasive access to centralized data on groups and individuals, and the ability to perform unparalleled analysis on that data. All too often, we have seen the willingness of leadership at tech companies to sacrifice ethical responsibility for the promise of a lucrative contract.

Invigorated by the threat that these invasive technologies pose towards minority groups, tech workers have spoken up and are organizing to keep company leadership in check. Given their unique positioning as valuable keystone components of the software engineering ecosystem, tech workers are using their bargaining power to assert their unwillingness to build systems that will harm and exploit vulnerable populations. Though this mobilization has been successful at a few tech companies, most company leadership has only further confirmed their desire to continue collaboration with United States law enforcement agencies and their willingness to arm the government with powerful tools from the private tech sector. This paper will examine the role that technology plays in US government law enforcement and the growing movement expressing ethical qualms about the level of involvement. The paper will focus on two subsets of the #TechWontBuildIt movement, #NoTechForICE which is centered on stopping companies from building systems for Immigration and Customs Enforcement, and actions against militarization of technology which is focused on stopping companies from building weaponized technology for the Department of Defense. I will provide an overview of key movement activity before diving deeper into an investigation of the movement’s organizing tactics.